The best of both worlds

We provide an extraordinary easy access to nearshoring for creating systems and applications.

Nearshoring is “the transfer of business or IT processes to companies in a nearby country, often sharing a border with your own country”, where both parties expect to benefit from one or more of the following dimensions of proximity: geographic, temporal (time zone), cultural, linguistic, economic, political, or historical linkages. (Wikipedia)

Outsource a part to us

On task that must use the time model, the client sets the expected results. The effectiveness is constantly monitored to increase the productivity. The time model is often used in outsourcing a business process.

Both models can be combined to achieve the best risk/cost ratio. This allows us to fulfill your vision, from the paper napkin to the deployable product.

Bring fresh power in your team

Use quick sourcing to extend rapidly an existing team, expert sourcing to gain momentarily the needed know-how, and the team sourcing for longer engagements.

Shape the home team at the best costs and without the risks of hiring. Extend your capabilities with new knowledge and additional workforce.

Compose a dedicated team to work exclusively for your project. Team members are carefully chosen in joint effort allowing a smooth and seamless integration. We provide quality and great response while you remain in full control.

Personal assistants is an often neglected model. We can provide you resources that are directly subordinate to your staff members. They can extend their technical expertise and unchain them from burden tasks. They can be contracted at full or part time. 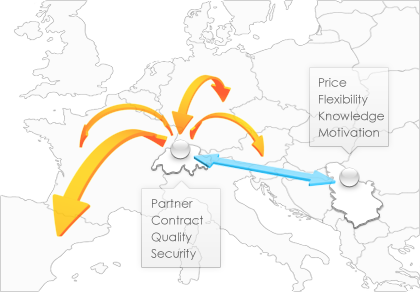 We are a Swiss company, based in Zurich, Switzerland

and our development teams are in Belgrade and Novi Sad, Serbia, Europe.

“the best of both worlds”

Management in Switzerland
an exception in western Europe

Swiss virtues like dependability and a down-to-earth attitude, combined with an uncompromising quality culture and manufacturing perfection leads Swiss contractors to underpromise and overdeliver.

Swiss contractors are committed to the success of their customers’ projects.

Switzerland is a unique experience

Development in Serbia
an exception in eastern Europe

Serbia has the western European culture

It is important to be understood. Serbia was part of Yugoslavia, the only region of eastern Europe that wasn’t part of the Soviet block. This allowed Serbian people to freely travel and exchange ideas with the western world. As there was no isolation from the western culture, the mentality is very similar to western world.

Serbian have the same cultural elements, as language, tastes, humor and education as the “western world”.

Serbia has a long tradition in engineering

Yugoslavia was the initiator of the Non-Aligned Movement (NAM, group of states which are not formally aligned with or against any major power block). As a developed country in the NAM, Yugoslavia provided engineering services. Big state-owned companies had long experience in planning and constructing dams, bridges, electrical plants, and provided medicine and other goods to other countries in the NAM. Engineers were educated at high ranked universities.

Thus, Serbia has a solid heritage in engineering and high level education.

Serbia is in the central European time zone

When you need them – they are present. A simple but often crucial fact.

It is important to be able to reach the development site whenever you feel your physical presence is needed. Belgrade is very well connected to all major European towns. You can fly in the morning and come back in the evening on the same day.

Serbia has many things to offer beside work

Serbia is a unique experience.